The highest cultural and civilizational values in Northern Pelagonia are witnessed within the Markovi Kuli protected area. The human presence in the protected area has been documented in dozens of sites, dating from the Neolithic period (6000 BC) and until the late Middle Ages.

The remains of past human activities, on the Markovi Kuli hill, are confirmed to be from the late Eneolithic period (2500 – 2100 BC) until now. During the classical period, at least three relatively spacious settlements existed in this area. The settlement of Ceramia is presumed to have existed on the hill and in the foothills of Markovi Kuli, the second settlement Kolobaisa is located in the foothill of the peak Zlatovrv, while the third settlement was located at the heights of the site Kukul – Baba.

The site “Kukul – Baba”, is located on a naturally predisposed defensive location, near very diverse geomorphological formations, 2.6 km northeast of the Prilep’s military barracks. Recent archaeological excavations have shown that after the settlements dated in the Eneolithic and Hellenistic periods, a complex of buildings dated from the late Roman period and later from the Middle ages existed on this location. These are the periods of the most intense human activities on this site. Its location is sufficient to accommodate some military units probably needed for the control and security of two roads crossings beneath the hill. One of the roads passed through its north side and led through the village of Prisad to the Derven pass, and the other to the south side to Pletvar. The well-preserved walls of the buildings up to two meters, as well as the numerous archaeological finds of a civilian and military character, accents the potential of this site for future scientific research and observation.

At the top of the Markovi Kuli hill, remnants of a settlement dated to the Classical (480 – 323 BC) and Hellenistic (323 – 30 BC) periods are discovered. At the foothill, more precisely in the area known as Zagrad, excavations of a larger necropolis from this period have been explored. Remains of synchronous human activities are also recognized at several other locations. As a very specific phenomenon, the rock-cut tombs should be noted. They have been discovered at several locations within the area of the Markovi Kuli protected area.

The earliest mention of a town named Ceramia is in the works of the Roman historian Livius who points out that during the wars with the Macedonians, the Romans in 170 BC conquered this town. In the highest fortified area of the Markovi Kuli hill, so far, only poor scattered findings dating to the Early Roman period (27 BC – 284 BC) have been discovered. Unlike this area, a great number of generally reused architectural elements from the early Roman period have been discovered in the southern slopes and at the foothill. Among them, numerous bases, whole and fragmented columns, capitals, as well as parts of gables and architraves of sumptuous public buildings and tombstones have been found. The stone elements (architectural and epigraphic monuments and tombstones) discovered in the city area named Varosh, found reused as building materials in the churches and monasteries, are an indication for the existence of lavish public buildings, temples, heroons, necropolises, etc. Among the epigraphic monuments, the most numerous are the tombstones with a text dedicated to the deceased. Considering the portrait sculpture, the torso of a high-ranking military commander or perhaps an emperor is undoubtedly the most significant find. Besides the figural representations in marble, fragments of pottery, roof tiles and bricks, tools, and coins dating from the early Roman period have been found.

In the late Roman period (284-641), a larger settlement with a fortified acropolis, and a suburb, as well as an open settlement developed on the top of the hill and the western, southern and eastern slopes. In the highest part the Markovi Kuli hill, under the medieval fortifications are the remains of walls reinforced with towers, which were a part of the fortress from the late Roman period. The entrance to the fortress, located on the eastern part of the north side is in the shape of a gate retracted between two rectangular towers, very typical for the period. The late Roman bath is located in the part known as Tashachica, a location that even today is rich with a large amount of water, necessary for the normal functioning of the bath. Parts of a necropolis from the same period have also been found in the eastern part of the cultural complex. With a relatively reduced intensity, the settlement continued to exist in the early Byzantine period, probably until the middle of the 6th century. After its demise, the primacy of maintaining security in the northern part of the Pelagonia valley was taken by the fortresses in the surroundings that enabled direct control of the passes and roads leading into the valley.

There are insignificant traces from the early Middle Ages, but the human activities on the Markovi Kuli hill are certainly confirmed in the period between the middle of the 9th to the end of the 12th century, a period when the existence of numerous residential and manufacturing buildings and necropolises have been confirmed. In the period from 9/10th until the middle of the 12th century, the remnants of a proto-urban settlement of а scattered type are an exceptional manifestation of the organic unity between the natural and cultural remains on the hill of Markovi Kuli. The most notable finds in this settlement are the housing and manufacturing buildings, as well as the funerary buildings connected to the Slavo-Byzantine cultural milieu (buildings whose lower parts are dug in a rock or the earth).

The most significant cultural and civilizational development of the site occurred during the 13th and 14th centuries, when the late Medieval city of Prilep, one of the most important military, political, cultural and economic centers on the Balkans existed on the site. The city consisted of two basic structural segments: a fortified acropolis enclosed by walls, towers, entrances, keep (donjon), cisterns, palaces, etc., and an open suburb – Varosh located on the slopes and beneath the hill, where palaces, а market, and several churches have been found. Within the suburbs from this period, the existence of 19 sacred edifices have been discovered, out of which the churches of St. Archangel Michael, St. Demetrius, St. Athanasius, St. Nicholas, St. Peter and Paul and the church dedicated to the Presentation of the Virgin, whose fresco-assembles are included in the anthology of Byzantine art.

Among the dozens of medieval churches which existed in this area, several masterpieces of medieval architecture and art are witnessed. 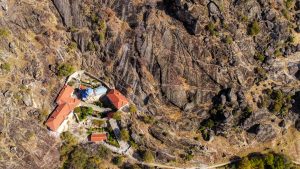