The Monastery of Treskavec, with a church dedicated to the Dormition of the Holy Mother of God, stands out with grandeur and magnificence of cultural features. The monastery complex was founded at 12th century, while the largest part of the construction work, which gave the shape to the monastic church, was undertaken at the end of the 13th century and the beginning of the 14th century when the outer porch was built, an undertaking associated with the patronage of the famous Byzantine commander, protostator Michael Glavas Tarhaniot. The church was erected on the remains of a square area from the earlier settlement located on the site. Numerous upgrades, refurbishments, and adjustments to the construction of the katholikon have been followed by appropriate painting activities for the decoration of the upgraded or repaired segments of the church. Today’s painted ensemble consists of frescoes dating from the second half of the 14th century until the middle of the 19th century. The earliest preserved frescoes date from the period 1334 to 1343. The wall decoration in the nave originates from the last quarter of the 15th century, and the painting in the altar area from the year 1570. The last major fresco paintings at Treskavec katholikon date back to the middle of the 19th century, when the famous artist Michael from Samarina painted the Virgin hymn “Of you, we rejoice (О тебе радуетсја)”. Besides the wall paintings, the carved doors which date from the 16th century are also of great artistic value, they are one of the most significant achievements of the masters of the so-called “Prilep-Slepce Carving School”. An important segment of the monastery complex is also the monastery kitchen, architecturally preserved in its original form, and the dining hall with its unique granite made tables. 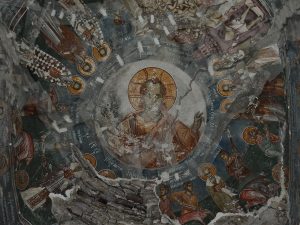 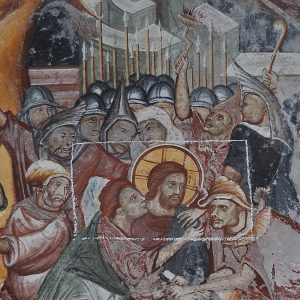