The monastery church dedicated to Archangel Michael lies in a picturesque location on the steep slopes of the Markovi Kuli hill and it dominates the landscape of the former medieval town. The church was erected in the second half of the 13th century as a mausoleum of the great chartularios John, who belonged to the elite of the Byzantine provincial administration. In shaping the concept of its construction, the influences of the architectural styles from Constantinople are evident, while the frescoes in the interior, created in the eighth decade of the 13th century, are associated with the workshop of the deacon and referendarius (secretary) John, the most prominent painter on the territory of the Ohrid Archbishopric in the second half of the 13th century. The frescoes preserved on the walls of the church and the rocks in its immediate surroundings manifest particular artistic and iconographical achievements for the period they were created. According to the creative architectural solutions besides the monastery church, the monastic dormitory also stands out. The Northwest dormitory was erected in year 1858, and it is an important representative of the mid-19th century architecture. Its construction was financed by the residents of Prilep and Varosh, with a special contribution from the city guilds. 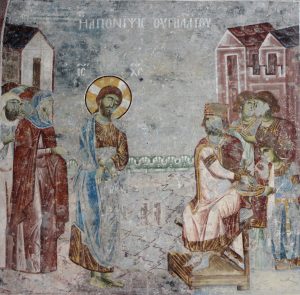